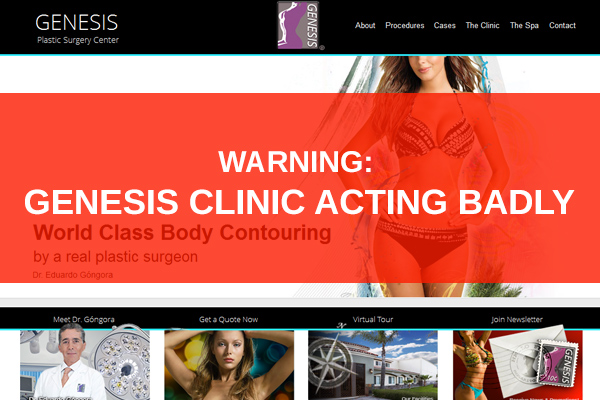 Why You Might Want to Rethink having Cosmetic Surgery in Mexico

Modern medical science has made just about anything possible when it comes to a person’s physical appearance. Whether you have extra skin hanging off after losing weight or you just want to have fuller lips, there are medical procedures to make these changes.

Because these treatments can be expensive, and out of reach for many, U.S. citizens may look out-of-country for clinics which charge a lot less—perhaps thinking, what could be so different really? Unfortunately there can be some pretty dire consequences to making a decision to head to Tijuana, Mexico, one popular area for these procedures which has little government regulation.

There are many things that people fear because they “might” happen, but tragic outcomes in lower cost Mexican cosmetic procedures have moved far past the threshold of mere possibility. Numerous people have experienced life-threatening side effects after traveling ‘south of the border’ for these affordable procedures, and as long as individuals stay uninformed about the dangers, it is likely these tragic events continue to occur.

The organization Patients Beyond Borders reports that up to one million people traveled to Mexico for plastic surgery in 2012 alone. Just a few of the tragedies described were those of two Texas women who hoped to have excess skin removed. When they came home, one found skin hanging from her incision site and the other was hospitalized by doctors wondering if she would even make it out alive. Another Texas woman traveled to Mexico in 2002 for a tummy tuck, but she came home with burst stitches and a huge hole in her abdomen.

The aforementioned disasters are not simply ‘one in a million’ outcomes; they are unfortunately part of the everyday risk for inexpensive Mexican cosmetic surgeries whose costs run 45-50% below those in the United States. Observing the political news coming out of Mexico, it’s already easy to recognize that the legal system is stretched beyond its means. This goes much further, however, than incidents just related to cartels.

Many “clinics” in Mexico aren’t even licensed to perform the procedures they’re attempting. According to Mexico’s Director of Federal Health Inspectors, many of these false clinics are in back alleys and don’t even have signs out front. Sadly, this makes it very difficult for the government to find and shut down these unlicensed facilities. This agency has recounted incidents where people died of organ failure after liposuction and were missing nipples after breast reductions.

There are, no doubt, safe places to have such procedures done in Mexico. But it is essential that you do much more research, and not make an assumption that a clinic or doctor is legitimate or even skilled in your particular surgery just because they have a website or are listed in local directories. To the contrary, you should suspect everything before trusting anything and strongly consider having such surgeries performed in a country with strict guidelines and credential requirements—and severe consequences for medical malpractice and unethical behavior. After all, the attraction of an ‘affordable’ operation is certainly going to lose its glow if you are disabled or disfigured for life.

The aforementioned organization, Patients Beyond Borders, does provide a list of cosmetic surgical facilities around the world which meet their medical guidelines, and this site may provide a good starting place for validating a facility or practitioner. For example: Conduct a search for “Liposuction” in Mexico and the only certified places that you get are:

Genesis Clinic is not listed on the Patients Beyond Border surgery search because Dr. Gongora’s practice doesn’t meet the basic standards that a clinic needs to be considered safe. Don’t put your life at risk at Genesis Clinic, don’t put your life at risk with a plastic surgeon that doesn’t conduct his practice with integrity and that it is only in business for money. Try the options listed at the Patients Beyond Borders site. Don’t deal with plastic surgeons acting badly like Dr. Gongora, a plastic surgery center where your life can be at risk.

It’s important to note, however, that facilities in the U.S. are under strict regulatory oversight, which means the physicians have everything to lose if they take unnecessary risks.

Plastic surgery of any kind, from simple injections to all-out under the knife procedures, should be treated as what they are: serious medical procedures. Most individuals wouldn’t accept subpar medical services when it comes to their health, but unfortunately, they don’t realize this is what they might be receiving when they decide to have these procedures done at “low-cost clinics.”